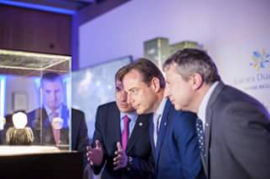 The 'Lesedi La Rona', which at 1,109 carats is the largest gem-quality rough diamond in the world, visited Antwerp yesterday, where it was revealed at the MAS Museum to a select crowd of approximately 120 diamantaires, dignitaries and friends of the industry. Hot topics of the afternoon concerned what will happen to the stone next, whether that will happen in Antwerp and, of course, how much it is worth. Lucara Diamond CEO William Lamb considers Antwerp a very logical place for the stone to visit. "Antwerp is and will always be a major diamond center. They have a great amount of technical expertise here and you have access to the right people. In fact, I do not believe that there is any technical expertise outside of Antwerp that would actually have the capacity to polish the stone. If somebody is going to polish it, the probability that it will make its way back to Antwerp is better than average. If I were to buy the stone, I would bring it here. Antwerp is a centre of excellence when it comes to knowledge of polishing large diamonds. There's really no other place."

Judging from the comments at the ceremony, hopes are high that the diamond will indeed head back to Antwerp after the June 29 auction at Sotheby's in London. Mayor of Antwerp Bart De Wever was pleased to have the diamond visit his city, saying that "I hope the Lesedi La Rona will return for a longer stay to be transformed from a rough into one or more polished diamonds. Perhaps it will even return permanently." CEO of industry representative body Antwerp World Diamond Centre Ari Epstein said, "We are not certain that it will return here, but we have the expertise required to cut such a diamond, and not too many places in the world can say that."

Lucara CEO William Lamb emphasized the astounding rarity of the diamond, reminding the visitors that they are among an exclusive group of only 400 people that have had the opportunity to see the stone, that no one alive has ever seen a diamond like this, "and may never see one again. Because this 1,109-carat Lesedi La Rona is an historic discovery. The last of this size, the Cullinan, weighed three thousand carats, and has been cut into the polished diamonds of the British crown jewels. On 15 November, the day we found our stone, there was no one in the world that had ever seen a diamond over a thousand carats." As for the next stage, the auction, Lamb is tight-lipped about his expectations. "The diamond will sell for what someone is willing to pay for it. If we look at it from the perspective of diamantaires, they will value it for its historical significance, and the fact that it is the only stone in existence over 1,000 carats."

"More important is what the buyer does with it," says Lamb. "Why not keep her like she is [the Lucara people now call her "The Lady", ed.]? If you cut it, you run the risk that it will only be the second largest polished diamond. Now it is the largest rough." Lamb also confirmed that she could have been larger, as the 374-carat diamond found the very same day was originally part of the Lesedi, so it could have weighed 1,483 carats. Whether she could have been recovered at that size is another story, which we will tell another day.