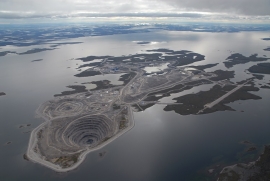 Dominion Diamond Corp reports that its first quarter diamond sales fell to $178.3 million from $187.7 million in the year-earlier quarter. Carat production in the first quarter was 34% higher compared with the Q1 2016. During the period, the Ekati Diamond Mine recovered 1.1 million carats from 1.0 million tonnes of ore processed compared with 0.8 million carats from 0.9 million tonnes a year before. The miner reported that it held two rough diamond sales during the quarter. "After lowering prices by 5% in the company’s January sale, in line with the market, prices quickly recovered and ended the first quarter on average approximately 8% higher than they started the fiscal year," the firm said in a statement. The company plans to hold three rough diamond sales in the second fiscal quarter of 2017.

"Market conditions in the rough diamond market during the first quarter improved significantly as inventories were replenished by manufacturers in response to a positive retail season at the end of 2015," the firm said in comments on the state of the market. "Consequently the downward pressures on prices faced last year were reversed which bodes well for more stable market conditions in fiscal 2017. The U.S. jewelry market was at the forefront of demand growth during the period and, despite the impact of uncertain economic growth on sentiment, sales in mainland China remained reasonably steady, conversely the Hong Kong and Macau markets faced considerable headwinds. Other major retail markets were mixed with some more resilient in local currency terms but adversely impacted by the strong U.S. dollar. The first quarter continued the positive momentum from the fourth quarter performing better than expected on tonnage which resulted from strong performance from both underground and open pit operations."