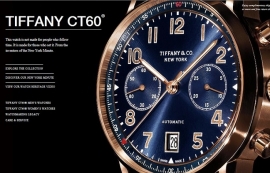 Luxury jeweler Tiffany & Co. is aiming to boost sales of wristwatches due to a slowdown in the jewelry market. Tiffany-made watches could account for 10 percent of the company’s sales within a decade, according to Nicola Andreatta, head of the firm's timepiece business, from just 1 percent last year. If it succeeds in hitting that target, it would likely make Tiffany one of the world’s top 10 watch brands, he told Bloomberg.

Engagement rings and other jewelry are the vast part of Tiffany’s sales, but the New York-based company sees timepieces as its most important emerging category. It introduced its CT60 watch line last year, with prices from $4,250 to $20,000 and aims to develop more product lines that Tiffany can sell exclusively through its own stores, helping drive traffic. The timepieces, which are made in Switzerland, have the potential to boost profitability because luxury watches are such a high-margin market, Chief Executive Officer Frederic Cumenal said last month. However, analysts warn that Tiffany will need to invest significant resources in marketing to increase more brand awareness.

The move comes as Tiffany faces increasing pressure to create new sources of growth. With customer traffic slowing, the company is expected to post declining sales when it releases first-quarter earnings later today (Wednesday). The strong U.S. dollar has deterred foreign tourists from its US stores while also hitting the value of Tiffany’s sales overseas.

In recent years, Tiffany has relied on high-profile partners to sell watches, however success has been mixed. A deal to develop timepieces with Swatch Group AG ended in a legal battle, with the two sides feuding over how the business should be run. Tiffany has had a more successful partnership with Swiss watchmaker Patek Philippe. The jewelry chain sells some Patek models and co-branded timepieces at its stores in the U.S. Offering its own line of watches would give Tiffany more control.