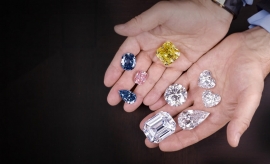 Luxury end diamonds are taking a hit from lower demand globally, with Graff Diamonds reporting a drop in sales and profits last year as tougher market conditions in the worldwide gem industry hit the high-end jeweler. Revenue plunged 32 percent to $500 million, while profit dropped 74 percent to $32 million in 2015, Graff Diamonds said in a filing to the UK’s Companies House, a registrar for businesses, Rapaport reported. Revenue from countries outside the U.K., where the company is based, dropped 34 percent to $464.1 million, while U.K. sales rose 11 percent to $36.1 million. The firm derives 93 percent of its revenues from outside Britain, and has been hit by lower demand for diamonds around the world, particularly in Hong Kong and China.

Nonetheless, company founder and chairman Laurence Graff said in the report that the financial results were "robust,” while CEO Francois Graff also said the firm had operated well. Graff Diamonds opened new stores last year in Japan, Macau and Gstaad in Switzerland. It also expanded its store at Harrods in London, and said that stores that it opened in 2014 in Zurich, Hong Kong and Japan “continued to trade successfully.” It plans to open stores this year in the Place Vendôme in Paris, the Wynn Palace in Macau and at Saks in Houston, Texas. The company now has 50 stores worldwide.