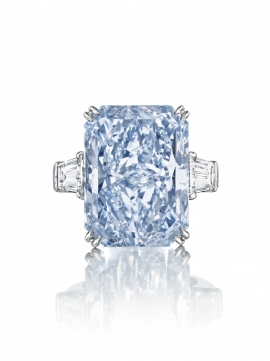 "It’s a blue streak," writes JCK's Rob Bates, reporting on yet another exceptional blue diamond - this time the 24.8-carat Cullinan Dream - that will be hitting Christie's Magnificent Jewels auction block in New York  on June 9, 2016. "Extracted from the legendary Cullinan mine in South Africa in 2014, the Cullinan Dream is the largest Fancy Intense Blue diamond ever to be offered at auction," reads Christie's announcenent. Bates adds that, "The auction comes on the heels of the May 18 sale of the Oppenheimer Blue, which fetched $57.5 million, setting a new benchmark for any jewel at auction. The sale of the 14.62 ct. Oppenheimer stone shattered the record set just six months earlier by another blue gem, the Blue Moon, which went for $48.5 million in November (and still holds the record for a per-carat price)."

Discovered by Petra Diamonds from the Cullinan mine in South Africa, the diamond is the largest of four blue diamonds cut from the 122.52 carat rough unearthed in 2014. In September 2014, the rough stone was sold for a value equivalent to US$27.6 million, with Petra retaining a 15% share in the net proceeds of the polished yield. The mine made history in 1905 when a 3,106.75 carat rough produced the Cullinan I (also known as the Star of Africa), the largest polished white diamond in existence. "The combination of the weight, colour and Type IIb properties together make the Cullinan Dream a truly exceptional and rare diamond," reads Christie's announcement. "Most fancy intense blue diamonds weigh less than a single carat as the grade calls for very strong colour and full saturation. At a weight of 24.18 carats, it is remarkable for the stone to display such a pure and consistently strong blue colour throughout every facet. The Cullinan Dream’s classification as Type IIb makes it an even more rare find." It has a VS2 clarity grade (very slightly included with inclusions observed with effort under 10x magnification), two grades below flawless. The estimate for the diamond is set at $23,000,000–29,000,000.