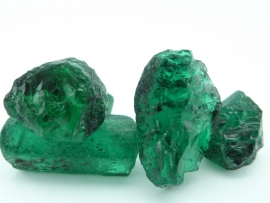 Gemfields has announced that it earned $14.3 million from its auction in Jaipur, India of predominantly lower quality rough emerald extracted by Kagem Mining Ltd (75% owned by Gemfields and 25% by the Government of the Republic of Zambia) in Zambia. The auction saw 3.67 million carats of lower quality emerald extracted from Kagem placed on offer, with 14 of the 18 lots offered being sold, generating auction revenues of $14.3 million. Gemfields claims that the auction represents a new record of $5.15 per carat for lower quality auctions. Of the 3.67 million carats offered for sale, 2.78 million carats were sold (76%), with a total of 26 companies placing bids at Gemfields' fourth auction of Kagem production in the current financial year. 22 Kagem auctions held since July 2009 have generated $426 million in total revenues. Gemfields' next auction is expected to take place in June 2016 in Singapore, and will be comprised predominantly of mixed quality rough ruby from the Montepuez ruby deposit in Mozambique.

Ian Harebottle, CEO of Gemfields, commented: "Jaipur has delivered another solid auction result, including a new record price per carat for our lower quality emerald auctions. The results from this auction mean that the Kagem mine has exceeded USD 100 million of declared revenues for the current financial year, and while we are confident that these numbers will be well surpassed in the years to come, we remain grateful for the part that each of our loyal staff members have played in ensuring that Kagem is the first mine to reach anywhere near this milestone in the history of the Zambian gemstone sector. Kagem is a partnership between the Zambian Government and Gemfields, and we would like to thank the Government for their vision and support in building and internationalising the Zambian emerald industry. Kagem would not have reached the USD 100 million milestone without their belief in promoting a transparent and globally-competitive gemstone sector."