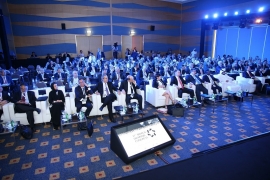 Financing and persuading banks to provide credit to the diamond trade, the lack of profitability for manufacturers, the critical need for generic marketing of diamonds and persuading Millennials to buy diamond jewelry, the damage caused by frequent changes to price lists, the threat from synthetic diamonds and deliberate overgrading, together with diamond sourcing protocols were the main issues debated at length at the World Diamond Congress in Dubai this week.

As the participants, members of the World Federation of Diamond Bourses (WFDB) and the International Diamond Manufacturers Association (IDMA), were preparing to leave on Thursday they were still debating the issues. Were solutions found? Few of the delegates would claim that the bodies have the power to find long-lasting solutions given the desire to find a consensus. But the meetings – held from early morning to late at night – both in the venue hall and in its corridors as well as the dining hall and lobby of the hotel where delegates were hosted, showed the passion of the representatives of the WFDB's 30 affiliated bourses and the 12 presidents of IDMA.

There were clearly differences of opinion, particularly over the Signet diamond sourcing protocol which was firmly rejected by three of Antwerp's diamond exchanges as well as many others as being too financially onerous. Despite the arguments of David Bouffard, Signet's VP for Corporate Affairs, that the firm's desire to map out the line of sourcing for diamonds, as it has done with gold after being forced to do so by the Dodd-Frank Act in the United States, would be on a voluntary basis initially and the company would not push diamantaires too far, too fast in the early stages, he was unable to win the day.

Another interesting debate took place over the issue of price lists. Martin Rapaport asked to attend the meeting and stepped into the lion's den. He outlined his case for how his list is created in general terms. He declined to give specific details, saying the methodology was proprietary and said that changes – both up and down – had to be made when needed, and rejected arguments that he "frequently" made alterations which was causing instability. He said he welcomed competition and if others wished to create a price list, then they were welcome to do so. Several such attempts have been made over the past year, but had come to naught, the meeting heard.