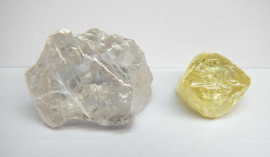 Australian miner Lucapa Diamond Company sold a parcel of 1,862 carats of alluvial diamonds from its Lulo Diamond Project in Angola for $2.1 million (A$2.9 million), reporting an average price of $1,150 (A$ 1,580) per carat. Since this lastest sale, further large 'specials' (diamonds weighing more than 10.8 carats) recovered from trial mining include diamonds weighing 60 carats, 35 carats and 21 carats. "The end of the Angolan wet season enabled Lucapa and its partners to resume alluvial mining at Mining Block 6 at Lulo, where initial special recoveries have included a 13-carat fancy yellow – one of the largest fancy-color gems recovered to date at Lulu." Lucapa recently made capital upgrades including and XRT module to facilitate the recovery of large special and Type IIa diamonds. In February 2016, Lucapa announced the recovery of an exceptional 404 carat Type IIa D-colour diamond. This gem, the biggest ever recovered in Angola, sold for US$16 million.