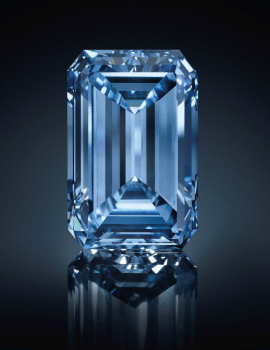 The 14.62-carat “Oppenheimer Blue,” the largest fancy vivid blue diamond ever offered at auction, set a world auction record, selling for more than $58.2 million (including commission and fees) reports Anthony DeMarco of Forbes. "The rectangular-shaped gem, with a high estimate of $46.1 million, was the lead item at Christie’s Geneva Magnificent Jewels sale. It managed to beat the 12.03-carat “Blue Moon of Josephine,” which sold for a world record of $48.4 million in November 2015 . It’s hammer price of approximately $51.3 million easily topped the Blue Moon."

"Bidding for the gem, led by Rahul Kadakia head of Christie’s New York jewelry department, started at 30 million Swiss francs (US$30.39 million). and went agonizingly slow (approximately 30 minutes), with long silent pauses, nervous laughter, incremental bidding at 200,000 Swiss francs (US$202,00) and applause after each million-dollar milestone, as viewed through the auction house live Internet stream." "Kadakia was happy to accept all bids no matter how small saying, 'once in a lifetime we have a stone like this.' The diamond is set in a platinum ring designed by Verdura, flanked on either side by a trapeze-shaped diamond. Its VVS1 clarity grade is one step below Internally Flawless. The diamond was previously owned by Sir Philip Oppenheimer, a member of the family that once controlled the De Beers Mining Company.