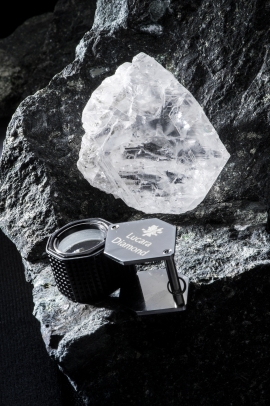 At 1,109 carats, the Lesedi La Rona diamond that Canadian miner Lucara Diamond unearthed at its Karowe Mine in Botswana in November 2015 ranks second among the largest rough diamonds ever discovered, and as a Type IIa stone, it is also of the highest gem quality. Antwerp World Diamond Centre has announced that it will be making the penultimate stop of its world tour in Antwerp next week where it will be unveiled at an exclusive event for a select audience including Secretary of State for Foreign Trade Pieter De Crem, Mayor of Antwerp Bart De Wever and members of the Antwerp diamond community. The event emphasizes the importance of Antwerp as the epicenter of the rough diamond trade and confirms the excellent ties between Lucara Diamond and the City, where many of Lucara Diamond’s clients are headquartered.

Lucara Diamond teamed up with auction house Sotheby’s to set up a world tour, showcasing the exceptional stone in major cities throughout the world, targeted at high-net-worth individuals who might be interested to buy the historical stone in its rough form. The stone will be heading to London where Sotheby's London will put the diamond up for auction on June 29. It is the first time that an auction house such as Sotheby’s, which typically specializes in selling exceptional polished diamonds and diamond jewelry, will sell a rough diamond. There has been much speculation on the price the stone might fetch, but given that earlier this month Lucara sold another rough diamond, “The Constellation” (813 carats) for a record amount of $63 million, the sky appears to be the limit for the Lesedi La Rona. David Bennett, chairman of Sotheby’s jewelry division, calls the sale of a stand-alone rough diamond "unprecendented". “Not only is the rough superlative in size and quality, but no rough even remotely of this scale has ever been offered before at public auction.”

The discovery of the Lesedi La Rona – which means “our light” in Setswana (Bantu language in Botswana) – was not only the most extraordinary and historic find in the last century, but also unleashed a veritable media storm, shared by millions of people across the world and capturing the hearts and imaginations of people from all across the globe. It is no surprise that Lucara CEO William Lamb decided to bring the tremendous diamond to Antwerp, as Antwerp had a significant role to play in some of the most historic moments in Lucara’s company history: for example, Antwerp was the site of the first Mothae diamond sale in March 2011, the first Exceptional Stone Tender was held in Antwerp in 2013, not to mention the vast amount of rough stones that were cut and polished to perfection by Antwerp’s finest, high-tech manufacturing units. Ari Epstein, CEO of AWDC: “We are extremely proud that the Lesedi La Rona is coming here for all to admire. It will be a unique occasion, not only because of the historic nature of this unique discovery, but also as a tribute to our city, the world diamond capital for more than five centuries, and to the excellent relationship between Antwerp and Lucara Diamond.”

In short, as Sotheby’s Bennett stressed, the stone is simply “the find of a lifetime.” That makes the upcoming auction, as well as its curtain raiser event to be held in Antwerp next week, an extremely unique occasion. The event is a result of the collaborative efforts of Lucara Diamond, Antwerp World Diamond Centre, Sotheby's, Swiss private bank Julius Baer and diamond broker Bonas.