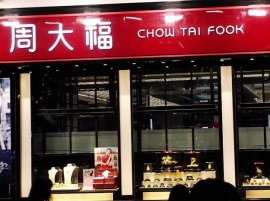 Shares in Hong Kong-traded Chow Tai Fook Jewellery Group dropped to a one-month low after it announced full-year profit fell as much as 50% as weak Chinese consumer demand hit revenues and the world’s largest jewelry retailer posted hedging losses on gold loans. Profit for the fiscal year that ended March 31 fell 40-50% compared to the previous year, the company said in a Hong Kong stock exchange filing, Bloomberg reported. The company issued a similar warning in November for first-half earnings, which dropped 42% from a year before due to weaker sales in Hong Kong and Macau.

Analysts said the profit drop was not a surprise as it was similar to the firm's estimate for the first-half. The company's main focus in the near future is when consumption in Greater China will recover, said Zhang Jialin, an analyst at ICBC International Research Ltd. China’s economic slowdown and anti-corruption campaigns have battered luxury retailers in Hong Kong and Macau, as Chinese tourists, who account for almost a third of luxury spending globally, are traveling elsewhere. Hong Kong retail sales fell 12% in the first quarter, with jewelry and watch sales plummeting almost double that.