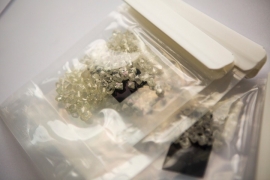 Rough diamond purchases in the first four months of the year were better than expected with around $4 billion in sales as manufacturers and others build up depleted inventories, however the usual seasonal slowdown for several months from May onwards is expected to provide clarity regarding the state of the market, writes Rough & Polished. The strength of demand for rough goods enabled De Beers to slightly raise prices at its April sales cycle in certain categories and has sold around $1.7 billion since the start of this year, while ALROSA’s rough sales in the first four months of the year are estimated at about $1.5 billion. ALROSA is holding its fifth sales cycle of the year this week, while De Beers' next sale is next week. The diamond market usually sees a seasonal slowdown from May to August when sales typically fall by up to one-third from the first months of the year. The rough goods bought up to now will gradually move to the market over the period of the summer lull – together with those polished goods that have already been cut out of rough purchased in January and February and are now beginning to enter the market. A new phase of restocking may be expected in September, when business activity will increase, and diamond cutters and jewelers begin to prepare for the holiday season.

Following the holiday season, there were shortages of polished goods of 0.5 to 1 carat, but diamond manufacturers and jewelers have largely replenished inventories, leading polished prices to remain virtually unchanged in March and even decline in April with polished goods of 0.5 to 1 carat slipping by 0.3%, while stones of 0.3 carat fell by as much as 1.3%. The article points to the trade statistics released by India's Gems and Jewellery Export Promotion Council (GJEPC) as confirmation. The showed rough imports in January-March 2016 exceeded imports from a year earlier by 30% in terms of volume and by 15% in terms of value. Meanwhile, polished exports, both in carats and dollars, remained comparable to the last year's level - approximately 8.5 million carats worth more than $5 billion.

Meanwhile, the Antwerp World Diamond Centre (AWDC) reported that Antwerp's rough diamond trade continued its path to recovery after the 2015 downturn, with the April figures showing its rough trade surged 32% in value and 39% in volume compared to April 2015, as Antwerp traded nearly $2.5 billion on 18.75 million carats of rough stones during the month. April rough exports increased nearly 30% year-on-year in volume as well as value, while rough imports spiked by 50% in volume and 34% in value compared to the same month a year ago. Antwerp's rough exports for the first four months of 2016 rose 23% in volume and 6.4% in value, while rough imports have risen 13% in volume and 2% in value over the same period in 2015.
Since polished diamond production is not increasing proportionally to exports, it can be assumed that these “excessive amounts” of rough remain in the inventories held by diamantaires.