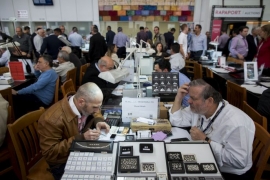 The system at the Israeli Diamond Exchange in Ramat Gan is built on trust, yet the arrest of veteran diamantaire Hanan Abramovich triggering an investigation into accusations that he defrauded fellow traders of $65m worth of money and stones, writes Financial Times, threatens to have a direct effect on traders who have allegedly lost out. But more widely, it will raise questions about the regulation and operation of a market where the presence of the state is limited and business disputes great and small are settled internally between traders. At stake is the future of a major industry in Israel with deep roots in Jewish history. Depending on what the investigation turns up, it could intensify calls for the authorities to introduce more transparency into the market.

Administrators say the bourse is open to greater transparency and liken it to a “family”, adding that they want to keep it that way. “Diamantaires when they have problems usually like to solve it in the family,” says Eli Avidar, a former Israeli diplomat who is the bourse’s managing director. “Just because we have one crook among us [would not] mean we need to change our culture. We definitely don’t have to delete our trust system." Yet the case of Mr. Abramovici, not to mention the massive "underground bank" fraud exposed late last year, has caused some soul-searching. His lawyers claim Abramovici has committed no crime. "Instead they blame shortcomings in the operation of the bourse for their client’s situation ... and they fault other exchange members for saddling him with more debt than he could repay. 'He has been a member of the bourse for 31 years,' says Mr Carmeli. 'The people they should be pointing a finger at is themselves: they gave him . . . more than he could take by giving him credit.'" This begs the question of why a 31-year veteran so woefully miscalculated the amount of debt he could handle, but that is the story they are going with.

Yoram Dvash, the bourse’s newly elected president, has declared a commitment to open up the market and has “put his full weight behind the police investigation,” says Mr Avidar. However, critics - including current and former traders interviewed by the FT -  say the bourse still has work to do. “There is nothing transparent in the whole business,” says one trader who alleges that bad practice is rife. “It never was transparent, never was supposed to be transparent - but it was thought to be transparent between the traders.” Under its internal code of conduct, a diamantaire can be disciplined if another trader files a legal complaint with the bourse. Two board members then call a meeting to interview both parties and issue a verdict, which could be a fine or temporary expulsion from the trading floor. Yet Abramovich had been in trouble before, was doing business even as his debts mounted (“It went on for the last eight months" said one insider) and no one did anything about it until those he duped finally went to the police.

There have been several other scandals as well, points out FT. Meir Ohana, a Ramat Gan trader, was convicted of laundering cheques and creating fictitious accounts in the 2011 “underground bank” case. He was also found guilty of moving money abroad under the cover of importing diamonds, without reporting any of it to tax authorities. In the same probe Menachem Magen, another trader, was convicted of providing unauthorised currency trading under the guise of selling diamonds. According to the state, no accounts were kept on the transactions, nor receipts nor invoices issued. Mr Magen is serving a 60-month prison sentence.Bourse officials say the affair was a one-off. Yet some traders say questionable business practices are still common.