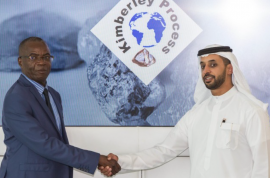 Award-winning news director of JCK Rob Bates, in his opinion piece "Why the NGOs and Dubai Still Can’t Get Along", addresses the persistent conflict between Kimberley Process (KP) chair UAE and the KP civil society coalition - the group of 11 human rights groups that participate in the KP - that is threatening to turn the upcoming KP interessional meetings into a failure: "the recent turn of events looks like we are in for another year of stagnation and animosity, and the scheme will once again fail to make needed improvements, despite the UAE’s promises last year of a fruitful, productive chairmanship." The 'turn of events' at issue is the breakdown of talks initiated by the World Diamond Council to end civil society’s boycott of this year’s KP meetings.

Last year, as Bates explains, the KP civil society coalition announced plans to boycott this year’s KP meetings after frequent antagonist United Arab Emirates ascended to the position of chair. Having apparently reached no compromise, "now relations between the two are as bitter as ever." And the issues are serious: "Ever since the UAE came onto the scene, there have been murmurs about how it has risen in the industry so far, so fast. The NGOs charge the center has lax controls and that it’s a haven for transfer pricing, where diamonds are undervalued in Africa and then sold for market price when they leave the UAE." Bates further notes that civil society coalition asked for four things during the mediation to end the boycott: a system of internal controls to prevent undervaluation of diamonds; enforcement cooperation with trading partners; greater vigilance to prevent illicit diamonds from entering the supply chain; and engagement with watchdog groups. Civil society coalition spokesperson Alan Martin says none of those conditions were met.

While the UAE KP Chair will host a ‘special forum’ on rough diamond valuation and conformity to coincide with the start of the Kimberley Process Intersessional, Martin says that the NGOs hoped the UAE would take more action on its particular issues, rather than broadening the conversation to include the entire industry. This clearly failed, and the situtation has only escalated. "Further inflaming the situation, in the midst of the meditation, the UAE KP office ... lodged a complaint with the KP that the civil society coalition had violated the confidentiality of last year’s UAE review mission. Martin denies this, noting that the information in question involved transfer pricing, an issue that “has been in the public domain for years,” and that the UAE’s complaint caused the information to be further publicized. In any case, this dispute demonstrates - and, sadly, not for the first time - a confrontational mind-set from the UAE that likely made this disappointing outcome inevitable."

Bates concludes that If the UAE can’t abide or manage to achieve cooperation between governments, the industry, and NGOs, one wonders why it sought the chair role in the first place. Martin believes the UAE will recruit friendly NGOs - he dubs them “fake” - to participate this year, as Zimbabwe did during its time of turmoil with the KP. He says that UAE reached out to two former KP participants - Global Witness and Amnesty International - but was rebuffed. Or, Bates points out, as an industry source puts it: “Dubai will likely portray this as victory. But in reality, the loser is the KP.”