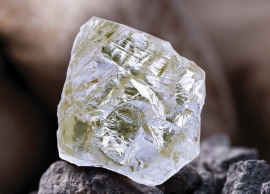 As Rio Tinto made a special presentation of the 187-carat Diavik Foxfire diamond to members of the trade in New York City, Alan Davies, the miner's chief executive of diamonds and minerals, explains to JCK how the diamond was discovered. The stone, found at the Diavik diamond mine in Canada’s Northwest Territories last year, is on a worldwide tour before it is auctioned off in June. Davies said the stone was the largest ever found in North America and had been shown in London and after New York would be taken to Tel Aviv and Antwerp before the bidding process starts online.

As for where the diamond would end up, Davies said: "One [potential buyer] might want to keep it as rough, while another might want to do a 100-carat stone in a fancy shape. Others might see if you can make a big pendant, maybe earrings in the 90-carat range. But we expect a couple hundred people to view it. There will be competition for it. The feedback we’re getting from the trade is that it will be pretty highly sought after." As for an estimate of the price it will be sold for, Davies said: "Our particular policy is not to constrain anyone else’s imagination."