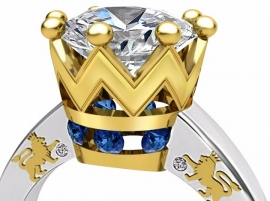 A series of diamond rings worth £225,000 ($325,000) has been created to honor English soccer champions Leicester City and its historic Premier League win this season. The rings were made by a Leicester-based jeweler and are set with a 5.01-carat central diamond set in a yellow gold crown - mimicking the Premier League trophy - flanked by blue sapphires. The rings also feature two gold lions facing each other on the silver band, another reference to the league trophy. Each ring will be engraved with the final number of points the team wins which could be as many as 83 if Leicester beats Chelsea in the final game of the season on Saturday.

The jeweler will produce the same number of rings as the team's final points tally. The team's stars will have the chance to buy the ring that matches their shirt number, and other rings will be made available to the public. It has also produced two smaller rings, one of which has the blue sapphire as the main stone, and two pendants which will match the ring.