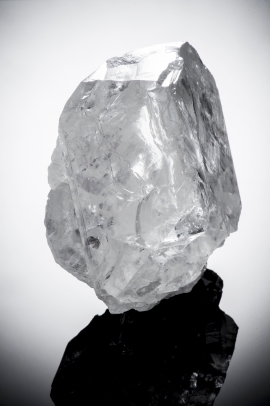 Earlier this week, Lucara Diamond Corporation unveiled the most expensive rough diamond ever sold, writes Avi Krawitz. "A short press statement - initially sent without pictures - reported the 812.77-carat stone named ‘The Constellation’ sold for $63.1 million breaking “all records” for a rough diamond. Ordinarily, Lucara would be making a bigger fuss about this eye-popping sale. But the company, along with the diamond and investment communities, knows this was a mere curtain raiser. The record is bound to be smashed when the 1,109-carat Lesedi La Rona diamond goes under the hammer at Sotheby’s London on June 29." Krawitz says that Lucara's $70 million pre-sale estimate for the stone might even be conservative given the pricetag of their 813-ct. rock.

Getting Sotheby's - better known for its presentation of fine jewelry and special polished diamonds - involved in the sale of a stand-alone rough diamond is indeed “unprecedented,” according to David Bennett, chairman of Sotheby’s jewelry division. “Not only is the rough superlative in size and quality, but no rough even remotely of this scale has ever been offered before at public auction,” he stressed. William Lamb, Lucara’s CEO, explained that the media hype surrounding the stone showed there was more value to be had through a “more public process”. "Simply put," writes Krawitz, "Sotheby’s is expected to bring a marketing prowess and access to potential buyers that Lucara wouldn’t have had on its own. That opens an interesting possibility private buyers may be bidding against manufacturers for a rough diamond. Or, manufacturers might bid on behalf of a private buyer, with the eventual polished already in mind." Lamb argued as an historic stone and collector’s item, Lesedi La Rona should not necessarily be polished since “it is an amazing piece in its natural form.”

Krawitz outlines several possibilities for the sale that, "add to the excitement surrounding these diamonds, which are proving a windfall for Lucara from a public relations and financial point of view. Excluding the two exceptional stones being sold this quarter, the company anticipates a revenue of $200 million to $220 million in 2016, down from $223 million reported last year. The two sales will, therefore, give it a significant bump." Investors seem impressed, he notes, as Lucara’s shares climbed 3 percent after the sale of The Constellation was announced, taking the stock 73 percent above its level at the beginning of the year. As Lamb succinctly put it, “these are exciting times for Lucara shareholders as well as the diamond market.” Botswana, where the Karowe Mine is located, should also be pleased, "as the government will net more than 50 percent of the sales value in royalty and taxes from both stones. Perhaps more important than their value, these diamonds are a source of pride for Botswana, which so heavily depends on the diamond industry."

In short, as Sotheby’s Bennett stressed, the stone is simply “the find of a lifetime.” That makes the upcoming auction – along with its curtain raiser announced this week – as unique as it’s being billed, and certainly worth making a fuss about.