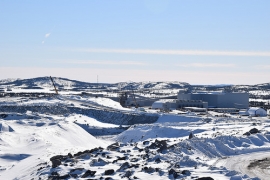 Stornoway Diamond Corporation has announced has announced the results for the first quarter ended March 31, showing a net loss of $22.6 million or $0.03 per share basic and $0.03 per share fully diluted, though the financial results at this stage are rather secondary to construction progress of the Renard mine project. Construction progress at Renard stood at 83.4-percent complete compared to the re-baselined plan of 77.6 percent at the end of the quarter, and at 92.1 percent compared to 84.1 percent at the end of April. Mining in the Renard 2-3 and Renard 65 open pits stood at 7,504,923 tons, or 102% of plan, with 194,416 tons of ore stockpiled. Underground mine development stood at 1,218 meters, or 74% of plan. The Corporation currently forecasts excess funding capacity available to complete the project of $116 million, comprised of $68 million of cash, undrawn debt facilities, receivables and expected mine tax credits, and $48 million of undrawn cost overrun facilities.

Matt Manson, President and CEO, commented: “Construction at Renard during, and subsequent to, the first quarter has continued to exceeded expectations. Progress in March and April alone was an impressive 9.4% and 8.7% respectively. This puts us well within the already re-baselined schedule for first ore processing by the end of September ... With market reports indicating a strengthening in rough diamond prices  and our project execution continuing well, our outlook for project completion and first diamond production later this year is positive.” The statement says that Stornoway's net losses were impacted by several items not reflective of Stornoway’s underlying operating performance, including changes in the fair value of a derivative and unrealized gains and losses from foreign exchange.