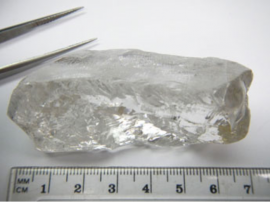 Swiss jeweler De Grisogono SA has acquired the rights to market a 404-carat rough diamond which it bought from Dubai trader Nemesis International DMCC. The giant diamond was discovered by Lucapa Diamond Co at its Lulo mine in Angola. Nickolas Polak, a director of Nemesis International, declined to disclose the price for which the stone had been sold, but in February Lucapa said it sold the 404-carat diamond for $22.5 million, Bloomberg reported. The stone is the world’s 27th-biggest and should take six months to cut, said Omar Chaoui, managing director of the Middle East & India region for Geneva-based luxury jewelry maker De Grisogono.