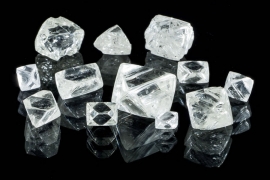 Diamond exploration and development company Peregrine Diamonds Ltd. has announced a maiden Inferred Mineral Resource estimate  of 4.23 million carats of diamonds for the CH-7 kimberlite pipe at the company's 100 percent owned Chidliak Diamond Project, Nunavut, Canada, with an overall average grade of 0.85 carats per ton. This brings the combined Inferred Mineral Resource for the CH-6 and CH-7 kimberlites of Chidliak to 15.62 million carats, again raising its resource estimate by 37% over its prior analysis. Its base model average diamond price as assessed in February 2016 is US$114 per carat with a modelled price range between $94 and $155 per carat. President and CEO Tom Peregoodoff says, "The 2015 Diamond Resource Development Program at Chidliak ... has successfully defined a significant Inferred Mineral Resource of over 15 million carats at Chidliak contained within the CH-6 and CH-7 kimberlites in the top 260 metres and 240 metres respectively and both which, importantly, remain open vertically at depth."

The Preliminary Economic Assessment of a Phase 1 Diamond Mine is currently being prepared, based on the combined CH-6 and CH-7 Inferred Mineral Resource of 15.62 million carats contained in 9.63 million tonnes of kimberlite, and the results are expected in late June 2016. Peregrine Diamonds' core asset is its’ 100 percent-owned, 513,249 hectare Chidliak project, located 120 kilometres from Iqaluit, the capital of Nunavut where 71 kimberlites have been discovered to date with eight being potentially economic. It also controls eleven diamond prospecting licenses in Botswana and the 8,493 hectare Lac de Gras project in the Northwest Territories, located approximately 27 kilometres from the Diavik Diamond Mine.