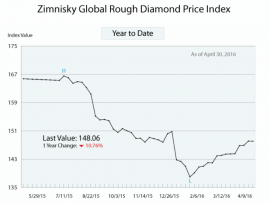 "As April 2016 concludes, the diamond industry has without question improved relative to a year ago, however, current industry data and commentary paints a mixed picture as to whether market fundamentals have in fact stabilized enough to support a new wave of sustainable growth continuing into the near-to-medium-term", writes Paul Zimnisky, author of the Zimnisky Global Rough Diamond Price Index to introduce his in-depth analysis of global diamond trade demand, supply and pricing in 2016. While demand has undoubtedly increased, as the strong early-year sales of De Beers and Alrosa demonstrate, Zimnisky attributes much of the uptick to the low levels of midstream inventory at the end of 2015, so this is something to watch going forward. The midstream appears to be rationalizing their purchases, adjusting to reduced credit availability and consolidating. Production remained stable or increased in 2015, so the key now is to manage supply carefully so as to not to unsettle the market. "Rough prices," meanwhile, "are up 2.4% over the last 30 days, down 1.7% over the last 6 months, and down 10.8% over the last 52 weeks. The Index is up 5.4% after hitting a 52-week low on Jan 23rd."

2016 rough sales through April have surprised to the upside mainly as a result of inventory shortages, with De Beers and Russia's Alrosa (RTS: ALRS) selling a combined $3.1B, which is an 18% improvement over a year ago, but still 13% below comparable 2014 figures. "Rough buyers benefited from a ~7% De Beers price cut in January which allowed for diamond manufacturer margin improvement, further supporting demand. Demand followed through in February which allowed De Beers to raise prices ~2% at its third sight of the year in April, the company’s first price raise since Q4 2014 ... However, despite the consistent early demand for rough this year, January to April is typically the strongest season of the year for the rough market, and demand going forward will most likely depend on support from the retailers as the new incremental rough supply is polished and makes its way downstream in the coming months." Zimnisky takes an extensive look at the "bifurcation of the Chinese market" as, "as Hong Kong/Macau growth continues to weaken relative to Mainland China. On the other hand, while diamond demand growth in Mainland has declined from its highs, the market is being supported by the expanding middle class consumer."

"Also worthy of note," he writes, "as of early April, the Chinese government took steps to encourage more domestic luxury spending within its borders. According to Reuters, Chinese consumers account for 1/3 of global luxury good sales, but only 40% of those sales actually take place in Mainland China, as lower prices on like-for-like items and greater assurance of authentic goods make shopping in Europe, the U.S., and Japan, more appealing for Chinese luxury consumers. Beginning on April 6th, China raised tariffs on watches and jewelry purchased abroad from 30% to 60% and 10% to 15%, respectively. Penalties for false customs declarations were also increased."

Currency issues are at the core of Zimnisky's supply analysis, in particular the strength of the US dollar. "While a strong U.S. dollar has in some cases subdued non-U.S. diamond consumer demand, the resulting weaker currency in producer nations has allowed production margins to remain stable, and in some cases increase, despite a weakening diamond price in U.S. dollar terms over the last year-and-a-half. This effect, along with lower oil prices, has encouraged increased diamond production in an environment where one might think that underlying diamond price weakness might discourage production growth." On specific companies, he notes that, "A new mine plan at Dominion’s Ekati operations could increase production upwards of 70% this year, or about 2M carats of incremental production." Diavik production is expected to increase 10% this year, as Dominion (and partner Rio Tinto) estimates total production at 12M carats this year. Alrosa has released a production target of 37-39M carats for 2016, and De Beers is on pace to maintain its 2016 production guidance of 26-28M carats, which would be a 5-10% decrease over 2015.

Meanwhile, "Rio Tinto’s Argyle mine in Australia, which is currently the highest production mine in the world by volume, is on pace to exhaust resources by 2020 or 2021. Argyle is estimated to produce 12-14M carats this year. With resources like Argyle dwindling, Alrosa recently mentioned that it sees Angola, relative to Russia or Botswana, as the nation with the most upside potential for new discoveries because it has been underexplored relative to other diamond rich locations in the world. ndiama, Angola’s state-run diamond miner, in March said that it’s new Luachi project could host as much as 350M carats with an annual production of 12M carats, which would put it on scale with Argyle."

As noted above, "As of April 30th, the Zimnisky Global Rough Diamond Price Index indicated that rough prices are up 2.4% over the last 30 days, down 1.7% over the last 6 months, and down 10.8% over the last 52 weeks. The Index is up 5.4% after hitting a 52-week low on Jan 23rd." London-listed Petra Diamonds (LSE: PDL), last week said for the 6-months ended March 31, the company realized a rough diamond price increase of 3.5% on a like-for-like basis. "Last year the Index was down 16.2%. Alrosa recently said at an analyst presentation that it's average realized diamond price was down 15% in 2015, but the price decline could have been as severe as down 40% if it had not had long-term contracts in place."