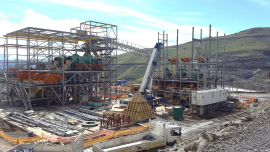 The mining industry in Lesotho is still in its infancy, writes Mining Weekly, but is developing and has great potential, says Lesotho Mining Minister Lebohang Thotanyana. The country anticipates that its diamond production will increase from the current 350,000 carats/year to 1.5 million cts/yr in the next two years alone as four new mines are set to open in the next year, including Firestone Diamonds’ Liqhobong diamond mine which is slated to open at the end of 2016 and projected to produce around 1 million cts/year for 15 years. In 2015, Lesotho adopted the Minerals and Mining Policy. “I think it provides us with a very solid foundation for our mining industry policies and regulations,” Thotanyana states, adding that the policy was largely influenced by the Africa Mining Vision – the African Union’s blueprint to develop the mining sector in Africa. He told Mining Weekly that Lesotho’s government is also undertaking legal reforms to modernise minerals legislation to promote investment in the sector by clarifying and securing investors’ mining assets.

The mining industry contributes 7.7% to Lesotho’s GDP; however, the country aims to increase this contribution to 10% over the next five years. Gem Diamonds’ Letšeng mine has been Lesotho’s only diamond mine for many years. In November 2015, diamond company Paragon Diamonds entered into an agreement to buy Lucara Diamond Corporation’s 75% stake in the Mothae mine for $8.5-million. Government approved the deal, but Paragon is yet to complete financing for the acquisition. The Minister further notes that French resources investment company Batla Minerals’ Kolo diamond mine, in Mafeteng, and Paragon Diamond’s Lemphane mine, in the Maluti mountains, are expected to enter production over the next two years. Additionally, the Minister highlights that the mining industry is a significant provider of jobs in Lesotho, where unemployment sits at 27%, with 37% of youth unemployed. He hopes to raise the number of people employed in mining from 3,000 to 10,000 by 2020.

Furthermore, Lesotho’s Mining Ministry will establish the Lesotho Diamonds Centre (LDC) this year, which will be a diamonds exchange platform for buying and selling diamonds. The centre is intended to improve access to diamonds in the country, a long-standing challenge. Lesotho is a diamond-producing country, but it has not been possible to buy diamonds directly from Lesotho. “If one wants to address issues of beneficiation, it is imperative that diamonds are available locally to beneficiate.” The LDC will initially be a small project focusing on the evaluation of diamonds by grading and sorting the gems, as well as securing government revenues obtained from royalty payments. It will also be mandated to collate correct data on the volumes of exported diamonds, which is a key requirement of the Kimberley Process. The issue of illegal mining in Lesotho is also very serious as the country has one of the highest concentrations of kimberlite intrusions worldwide. Therfore, Thotanyana says it is imperative to "formalize the artisanal and small-scale sector and ensure that they can sell the diamonds they discover legally in Lesotho.”