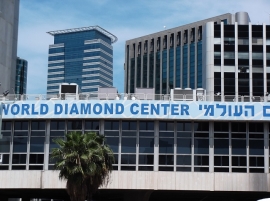 A lengthy article in the Ha'aretz newspaper begins by looking at the case of Hanan Abrahamovich and an alleged fraud with a value of around $55 million before talking about other financial shenanigans, such as an underground bank that operated within the Israel Diamond Exchange, bankruptcies and a family firm that allegedly owes other IDE members $15 million. “For seven months Hanan Abramovich told us stories – there is money, there isn’t money. He kept saying ‘God will provide’ and making promises. We counted 12 different stories. All the scenarios imploded. Finally the diamond traders gave up and started proceedings,” explained IDE Managing Director Eli Avidar.

When Abramovich failed to turn up for a meeting of the IDE's Legal Committee, IDE President Yoram Dvash called the police to investigate the affair, he said. “The management changed four months ago, and since then there’s been a change of phase,” said Avidar. “The way the affair was handled is an example of what I mean. This is the first time that the president of the IDE invites the police into the domain to investigate a story like this.”

The article also reveals another suspicion of criminality. A month and a half ago, the IDE management filed a complaint with the police against the diamond trading company Ben-Dor, resulting in an investigation. Brothers Oren and Tomer Ben-Dor are the third generation of a diamond trading family that went bankrupt last October. Dvash and Avidar say they owe other diamond traders $15 million. “We called in the police because they ostensibly committed a crime,” says Dvash. “They took merchandise from people by the consignation method, but didn’t return the money. Abramovich also took merchandise on consignation. He was trusted. That’s why he reached such extraordinary sums – he wasn’t sold the goods, he was given them. We involved the police because if a trader gets into financial trouble, we would support him, but somebody who stings other traders – we condemn.”

Meanwhile, about a third of the merchants on the IDE have suspended or stopped working, estimates Jacob Kattan, a former IDE vice president, with offices standing empty. “Since 2008, every year there are two to five bankruptcies, and making a living has become hard,” Dvash said. “I have no doubt some members have left. It’s mainly because the economies in Europe and the Far East are still stagnating." He also mentioned that cash deals are being phased out with new regulations brought into force by the bourse.