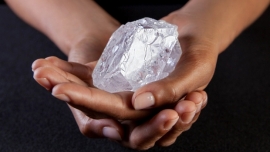 Lucara Diamond Corp. has reported strong first quarter 2016 revenues of $50.6 million or $649 per carat and cash of $144.3 million. The company’s revenue for the period represents a 41% increase year-on-year compared to the $29.6 million in the first quarter of 2015, gained from an average of $278 per carat. EBITDA for the period was $30.7 million (Q1 2015: $11.9 million), with an EBITDA margin of 61%. Following the company’s first quarter exceptional stone tender – which achieved $51.3 million – year-to-date revenue has exceeded $100 million. Lucara also completed the transfer of its shares of Mothae Diamonds Pty Ltd and the site bulk sample plant to the Government of Lesotho. In consideration, the Company was released from any rehabilitation liability for the Mothae Project, which had been accrued in the accounts for approximately $2 million.

The statement further announces that diamond recovery has remained strong with a total of 165 special stones (+10.8 carats) recovered during the period, including 8 stones over 100 carats (Q1 2015: 6 stones). Mining of ore and waste stripping at its Karowe Mine in Botswana to open the pit at depth was largely in line with forecast. President and Chief Executive Officer William Lamb, commented, "Lucara's high quality stones and production assortment has resulted in strong customer demand for our product generating revenues of over $100 million this year. With management's focus on cost control we continue to achieve high operating margins and returns. Lucara's exploration program continues to advance and with the deep drilling of the Karowe resource due to commence in the second quarter we are excited by the prospects for the remainder of 2016 and the potential organic growth opportunities."

All eyes now turn to the sale of the Lesedi La Rona diamond, the 1,109 carat stone - the largest discovered in over a century - unearthed last November. Sotheby's will put the diamond up for auction in London on June 29, and it could sell for more than $70 million, according to the auctioneer. David Bennett, chairman of Sotheby's jewelry division, called the discovery "the find of a lifetime" and the auction unprecedented. He said the rough gemstone, "of exceptional transparency" could yield the largest top-quality diamond ever cut and polished. "Not only is the rough superlative in size and quality, but no rough even remotely of this scale has ever been offered before at public auction," he said. The largest diamond ever found was the 3,106-carat Cullinan diamond, unearthed in South Africa in 1905. It was cut into nine pieces that form part of the U.K. Crown Jewels. The Lesedi la Rona - Its name means "our light" in the Tswana language of southern Africa - could smash the record price for a diamond of $48.5 million, paid at a Geneva sale last year for the 12.03-carat polished "Blue Moon" diamond.