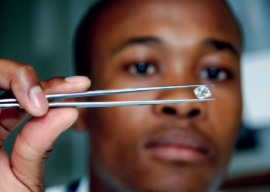 According to the company's 10th annual Report to Society publication, investment by The De Beers Group of Companies in skills training for the local workforce and social projects increased 13 percent to US$52.5 million in 2015. De Beers also improved its environmental performance, with reductions in energy consumption and carbon emissions. De Beers invested US$24.3 million in development training for its workforce in 2015, a 30 percent increase on the US$18.8 million the company invested in 2014. The company also invested US$28.2 million in social projects, which benefited 47,800 people in its producer countries – an increase from the US$27.6 million it invested in 2014. The company reduced its environmental footprint, achieving savings of US$6.8 million as a result of reduced energy consumption and carbon emissions over the last two years.

Also of note is that nearly three-quarters of De Beers’ total diamond production coming from Botswana, and Botswana holdis a 15 percent ownership interest in the company. De Beers commissioned a socio-economic impact study, published in 2015, to establish the value their partnership generates for Botswana today, concluding that its total contribution to the Botswana economy was US$4.4 billion in 2014, or 27 percent of gross domestic product, more than any other sector. It directly employing nearly 8,000 people, of whom 96 percent were Botswana citizens In the broader economy, its activities supported the equivalent of one in every 20 jobs in Botswana. CEO Philippe Mellier said: “Investing for the long term, driving positive change and unlocking opportunities through diamond development are at the core of what we do and I am very proud of our performance in these areas in 2015. However, positive performance must not be seen as grounds for complacency and we will redouble our efforts in 2016 so that diamonds continue to have a positive and lasting impact for our partners, our employees and the communities in which we operate.”