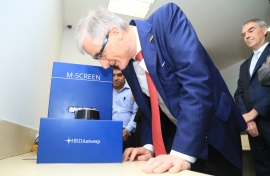 HRD Antwerp, Europe’s leading diamond certification authority, has inaugurated its new Mumbai office extension and launched a new melee diamond screening service. At the center of this service is M-Screen, the world's fastest automated melee screening device that screens round brilliant diamonds from 1 point to 20 points for potential lab grown diamonds, potential HPHT colour enhanced diamonds and simulants. The M-Screen automatically feeds, screens and sorts out round brilliant diamonds at a speed of minimum two diamonds per second (7,200 diamonds per hour). Depending on the size of the stones and the size of the batch, the speed can be as high as a staggering 10,800 diamonds per hour. WTOCD, the Antwerp Research Centre for Diamonds, has developed the M-Screen which will be commercialized by HRD Antwerp.

Mr. Ravindra Chhabria, Managing Director HRD Antwerp - India, said that such technology is necessary in light of, "the increasing amount of lab-grown diamonds entering the diamond and diamond jewellery market. We’re positive this new service will significantly contribute towards strengthening consumer confidence throughout the diamond pipeline, both domestic as well as internationally.” Of the extension of its Mumbai office, Mr. Peter Macken, CEO of HRD Antwerp, said that in 2012, "we anticipated the Indian diamond and diamond jewellery market to see an exponential annual growth. Now almost four years later we’re delighted to see these forecasts have held and the need for an extra extension of our office deemed necessary."

The official opening of the new HRD Antwerp Mumbai office extension took place on April 27th  and was attended by Minister-President of the Government of Flanders Mr. Geert Bourgeois, Mr.  Jan Luykx, Ambassador of Belgium in India, Mr. Peter Huyghebaert Consul General of Belgium in Mumbai and Mrs. Claire Tillekaerts, CEO Flanders Investment & Trade Agency, following a delegation of Belgian and Indian Government Officials and Industry Representatives. The visit was part of the largest-ever trade mission of Flanders to India.