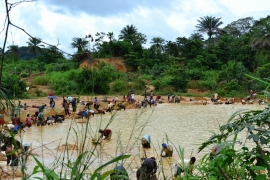 The Diamond Development Initiative (DDI), an organization dedicated to improving the working conditions and lives of artisanal diamond miners, is announcing the launch of the Maendeleo Diamond Standards (MDS), the organization anounced today in a press release. Maendeleo, the Swahili word for development and progress, is a fitting designation for standards that will ensure respect for human rights, for the environment and for community well-being, according to Dorothée Gizenga, Executive Director. “Artisanal diamond mining, carried out informally with rudimentary tools, is a risky business in many ways. Historically the people who do the hardest work live in poverty and have been subject to exploitation and violence. “These standards are an important step in protecting the miners, regulating the sector and producing diamonds that the jewelry industry can be proud to pass along to consumers.”

The roll-out of the initiative is starting in the diamond-rich Koidu district of Sierra Leone. 14 remote mining sites have been trained on the standards and 13 of the sites have now been certified MDS-compliant based on a third-party audit. This means that diamonds produced at these sites have been mined responsibly and ethically, and will begin to respond to the growing demand for ethical products from discerning consumers. Expansion will be underway in the Democratic Republic of the Congo in 2016 and further expansion is anticipated in West Africa in 2016-2017. DDI hopes that governments of alluvial diamond producing countries will take part in the effort to scale and replication of the MDS system by partnering with DDI for roll-out. Ainsley Butler, MDS Program Director, says, "This process is feasible, scalable and replicable." "This is effective development."

The MDS are composed of eight specific standards, covering legality, consent and community engagement, health and safety, violence-free operations, environmental management, interactions with large-scale mining and site closure. Ian Smillie, Chair of the DDI Board, points out that the Maendeleo Diamond Standards is the only model that exists in the artisanal diamond sector. The system is noteworthy as an effective complement to the Kimberley Process (KP), an international protocol to prevent the flow of conflict diamonds. "MDS takes the work of the KP one step further, says Smillie. "While the KP deals with regulatory issues, the Maendeleo Diamond Standards address the development needs of the artisanal diamond miners and their communities, which is foundational to conflict prevention."