Rockwell Diamonds Sales and Output Down in Q4, Restructures Operations 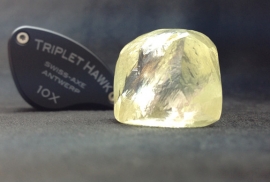 Canadian alluvial miner Rockwell Diamonds, operating in South Africa, posted a 45% drop in sales on the year to $7.1 million in its fiscal fourth quarter for the three months to the end of February. The volume of sales dropped by more than 40% to 4,925 carats, while production at its operations in South Africa fell 33% to 4,714 carats. Despite these less than optimal results, carat sales were 22% higher than in the third quarter, and the average carat price realized from the company’s Middle Orange River projects improved by 9% quarter-on-quarter, to US$1,448 per carat. James Campbell, CEO and President said, “After a very difficult operating period the fourth quarter performance showed positive signs of recovery in spite of the continued overall weakness in global diamond pricing. The recent streamlining of corporate structures is expected to deliver tangible cost saving benefits in the short term.”

The quarter was marked by imminent cessation of operations at Saxendrift, necessitating that an official restructuring process be initiated, though a change in the operational parameters has allowed closure to be postponed beyond the planned end of February to May 2016. The approved recommissioning of operations a 200,000m3 operation at Wouterspan is expected to absorb a large proportion of the Saxendrift workforce and equipment, and Rockwell continues to pursue its medium term target to process 500,000m3 of gravel per month in the Middle Orange River. According to Cambell, the recommissioning process is, "making good progress".