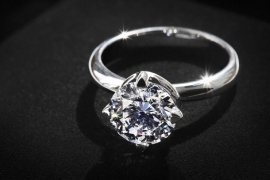 US consumers purchased a record annual level of $39 billion of diamond jewelry in 2015, according to industry data published by De Beers. However, the global market saw a 2% decline in diamond jewelry sales last year to $79 billion from a record $81 billion in 2014. The figure for the US market was a 5% rise on 2014 with De Beers attributing it to sustained economic recovery, higher levels of job creation and wage growth. The US remains the world’s largest market for diamond jewelry sales and increased its share of global polished diamond demand to 45% last year from 42% in 2014.

The diamond miner also reported that there was a rise in demand from China in 2015. When including acquisitions by Chinese abroad, the overall growth rate was 3% in RMB, the Chinese currency. Meanwhile, demand from consumers in Japan, India and the Gulf consumer markets saw some declines in local currency terms in 2015, with the strength of the US dollar further impacting growth rates when translated into US dollar terms. At constant currency, global consumer demand for diamond jewelry grew by 2%. However, the strength of the US dollar during the year negatively impacted growth at actual exchange rates.

"The outlook for 2016 is driven by expectations of steady but subdued global economic growth, with weakening growth in emerging markets and a fragile recovery in the advanced economies," De Beers wrote in a statement. "The US is again expected to be the main driver of growth in 2016." Philippe Mellier, De Beers Group Chief Executive, said: “Despite 2015 being a challenging year for rough diamond demand, consumer diamond jewelry demand was robust. Encouragingly, the US – the largest and most mature market – continues to grow the strongest, while China continues to grow from an increasingly larger base. There remains a positive medium to long-term outlook for diamond jewelry demand, driven by the US and the growth of the middle classes in emerging markets.”