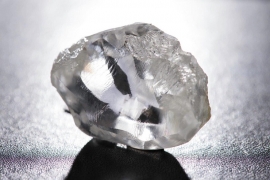 Petra Diamonds Ltd has released an upbeat production and trading update for its 2016 fiscal first quarter, with rises in production, revenues, diamonds sold and rough diamond prices. Production rose 26% to 995,905 carats in the January 1 to March 31 period with output "favourably impacted" by the Kimberley tailings operations following completion of the Kimberley Mines acquisition in January. Production for the nine months to March 31 surged 10% to 2,625,308 carats. Petra said it is increasing its production guidance for FY 2016 to 3.6 Mcts - 3.65 Mcts from 3.3 Mcts - 3.4 Mcts following the integration of the Kimberley Mines assets.

Meanwhile, revenue jumped by 25% to $120.5 million due to increased sales volumes including the sale of a 32.33-carat pink diamond from its Williamson mine in Tanzania for $15 million. Revenues for the nine months to March 31, however, were down 12% to $274.4 million, the miner reported. Diamonds sold increased 13% on the year in the quarter to 937,526 carats following the initial integration of the Kimberley Mines. Rough diamond prices rose about 3.5% on a like for like basis in comparison to the average for H1 FY 2016, due to an improvement in rough diamond market conditions.