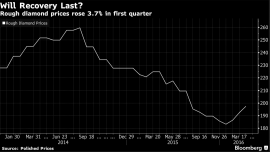 Fresh off the heels of a promising Q1 2016 production and trading update announcing a 26% increase in production and 25% rise in revenues, Petra Diamonds' CEO Johan Dippenaar has joined other mining executives in warning that it’s still too early to tell if the industry’s rebound from the worst year since the financial crisis will last, writes Thomas Biesheuvel for Bloomberg. “Prices are up, the market definitely has a positive feel about it,” Dippenaar said in an interview. “It’s a volatile world and we’ve all learned the lesson to be a bit more cautious and not get pulled into exuberant thinking.” Dwindling demand and pressure to reduce rough prices, which ultimately fell 18% by the end of 2015, compelled De Beers and ALROSA to rein in their supply to the market. This created some shortages, a rebound in buying and a 3.7% increase in rough prices. “So far, 2016 has seen significantly stronger rough diamond demand than that experienced at the end of 2015 as the actions taken by the industry continue to have a positive effect," De Beers CEO Philippe Mellier said earlier this month.

De Beers expanded sales at its last three sights, while Alrosa’s first-quarter diamond sales surged 70% as it drew down stockpiles built up last year. Still, "De Beers and miners including Gem Diamonds Ltd. have said that it’s too early to say if the recovery will continue," writes Biesheuvel, adding that, "The first three or four months of the year are traditionally the busiest in the diamond industry as manufacturers and retailers rebuild inventories after the holiday season, which is a key sales period for jewelry. Dippenaar said it may take until early next year for a clear indication of the strength of the recovery."