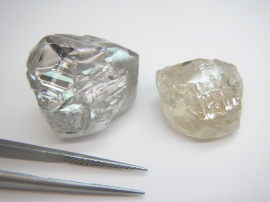 Lucapa Diamond Company (Australia) has announced the recovery of more large gem-quality diamonds during trial mining of the E46 alluvial terraces at its Lulo project in Angola. The latest three specials (diamonds +10.8 carats) include two high-color white Type IIa diamonds weighing 88 and 30 carats. It also states that more than 30 percent of the diamonds above 1-carat recovered in the E46 project are Type IIa, a rare category of diamonds that are almost, or entirely, devoid of nitrogen impurities, and are considered the highest level of purity in a rough diamond. These diamonds are now added to the 10 special diamonds - including two +50 carat stones - recovered from E46 since trial mining commenced in this new area in March 2016.

Lucapa and its partners commenced alluvial diamond mining operations at Lulo in January 2015 and scaled up mining and processing operations to 20,000 bulk cubic metres per month in the September 2015 Quarter. Lucapa operates Lulo in partnership with Endiama, Angola’s national diamond company and private group Rosas & Petalas.