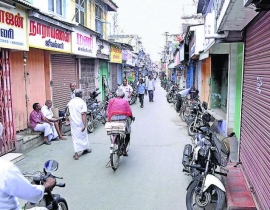 India’s Ministry of Finance has formed a sub-committee to, "look into issues related to the Imposition of Central Excise duty on jewellery", which is the 1 percent excise duty recently imposed on the jewelry industry. The government also deferred the deadline for jewelers to register with the central excise department to July 1, 2016, according to the Gem and Jewellery Export Promotion Council (GJEPC). Ashok Lahiri, a former chief economic advisor to the government, will chair the five-person panel, while the names of the trade representatives in the sub-committee would be decided in consultation with Dr. Lahiri. On March 2, the jewelry industry commenced a strike that last approximately six weeks until it was called off provisionally in advance of the popular gold buying season in April and May. The industry is still against imposition of the duty, and threatened to recommence the strike if the government did not consider rolling back the 1% tax. Now some jewelers have done just that.

India daily Financial Chronicle reports that a section of jewelers in north India has now resumed their strike seeking repeal of excise duty. The jeweller fraternity is divided on the issue as some national-level organisations are not supporting the strike. Jewelers in states of Delhi, Maharashtra, West Bengal, Madhya Pradesh, Punjab and Rajasthan have gone on a three-day strike from Monday. Striking jewelers under All India Jewellers Action Committee also staged a demonstration in Delhi. “We had called off the strike earlier this month as the Parliament was not in session. Some of the artisans also were facing tough time being out of jobs. Now that Parliament is back in session, we are resuming our strike and our demand to repeal excise duty. Initially, the strike is for three days, but we may also extend it if our demand is not met,’ said Surinder Jain, vice president, All India Sarafa Association. The All India Gems and Jewellery Trade Federation is not supporting the strike. “The strike is partial in some states and south Indian jewellers are not participating in it. The excise duty will not be repealed but the government has promised to look into our recommendations on easing the norms and GJF will abide by the government’s decision.” said G V Sreedhar, chairman, GJF.