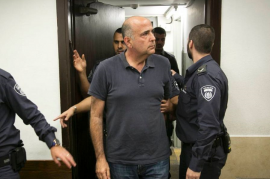 Veteran Israeli diamond dealer Hanan Abramovich has been remanded in custody for a further two days on suspicion of fraudulently acquiring $55 million of diamonds. In addition, his son was remanded for 24 hours on suspicion of being involved, Israeli financial news outlet, TheMarker reported, citing Israel Diamond Exchange (IDE) sources. His son was questioned by police after diamantaires said that he was involved in his father's business, though he claimed to not know anything about them during questioning. Hanan Abramovich told police that he had been dealing with financial difficulties since October 2015 and that he was not guilty of fraud but had experienced business failures.

Reports last week said that Abramovich had fraudulently acquired millions of dollars of diamonds which could, in turn, lead to the bankruptcy of up to a dozen diamond companies at the bourse. Media reports in the Israeli press have not mentioned the names of companies that have been allegedly affected by Abramovich's actions.