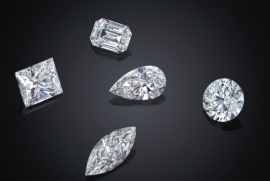 Press Release: The De Beers Group of Companies today announced that polished diamonds with grading reports from its International Institute of Diamond Grading and Research (IIDGR) can now be listed on the RapNet polished diamond trading platform. Polished diamond traders will now be able to list, filter and search for polished diamonds with IIDGR grading reports on RapNet. IIDGR therefore becomes one of a handful of grading laboratories able to have its reports accompany polished diamonds listed on the platform, helping to promote the IIDGR grading proposition on the international stage. Jonathan Kendall, President of IIDGR, said: “We are pleased to have arrived at this agreement which reflects the growing demand for our innovative, technology-driven grading services. “I would encourage all our grading customers to begin uploading their polished diamond inventories with IIDGR reports to the RapNet site, opening up their stock to the strong expression of demand we are seeing from retailers.”

The De Beers Group of Companies on 22 February announced that following an initial pilot testing of the service in the Far East, its IIDGR had launched its grading service in the Far East, Middle East, India and Europe, with facilities in Antwerp, Surat and Maidenhead. The service, which employs De Beers’ proprietary grading technology to provide outstanding accuracy and consistency, is suitable for all sizes, colours, shapes and qualities. Jonathan Kendall, President of IIDGR earlier said: “Our service aims to provide diamantaires with total peace of mind when it comes to grading. The innovative technology solutions developed in-house at De Beers enable us to provide an extremely accurate and consistent service and our leading capabilities in diamond verification provides customers with an additional layer of confidence."