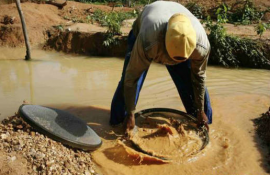 Venezuela concluded a week of meetings with representatives of the Kimberley Process on Friday in what has been hailed as the final steps towards the South American country’s recertification as an international producer of non-conflict diamonds, reports venezuelanalysis.com. Ten years ago, civil society organization Partnership Africa Canada (PAC) uncovered widespread evidence of "mismanagement" (smuggling, illegal mining) in Venzuela's diamond sector, and in 2008, "Faced with the facts of our report, Venezuela chose to disengage from the KP rather than fix its shortcomings. It “self-suspended” itself and subsequently ignored further inconvenient questions from the KP." The KP in November 2013 formally placed Venezuela on a list of countries that cannot trade diamonds. Now, after eight years outside of the process, Venezuela appears to be in the final stages of reentering the international agreement as a crucial step towards resuming diamond exports, though there is currently no set agenda as to how long these stages will take.

Over the course of last week, Venezuelan authorities met with a special KP delegation composed of representatives from China, Angola, South Africa, Canada, the European Union and Russia. The delegates were invited to visit the region of Guaniamo in Venezuela's Bolivar state, which is home to one of the largest diamond reserves in Venezuela. The representatives were tasked with evaluating if legal and environmental norms are respected in the course of Venezuelan diamond mining, which is a precondition for readmission. If Venezuela is found in compliance with these norms, it will be authorized to print KP certificates using the same technology utilized to print official currency, which must accompany all shipments destined for international markets. “Venezuela is currently a few steps away from reentering the great Kimberley Process family, so that our diamonds will be for peace and won’t be classified as ‘conflict diamonds,’" explained Vice-Minister for Mining Richard Lozada. The move to reenter the international diamond trade under the KP is part of President Nicolas Maduro’s “15 economic motors” initiative aimed at jumpstarting Venezuela’s ailing economy amid a severe recession triggered by the collapse of global oil prices.