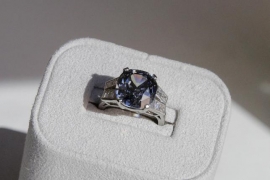 A 9.54-carat rare blue diamond ring once belonging to the late Shirley Temple, one of Hollywood's most famous child actors, failed to sell at a Sotheby's auction in New York on Tuesday. Bidding opened at $19 million and closed at $22 million, which was below the ring's reserve price where it had been estimated to sell for between $25 million and $35 million. The fancy deep blue diamond ring was purchased by Temple's father for $7,210 in 1940 around the time of the actress' 12th birthday. Temple died at age 85 in 2014.