India Changes Tune on Koh-i-Noor Diamond, Wants It Back 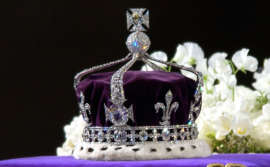 The Indian government says it will make every effort to bring back the 106-carat Koh-i-Noor diamond, which is part of the British crown jewels, only days after its solicitor general told the supreme court it would not request their return, writes The Guardian. India’s solicitor general had said on Monday that Britain shouldn’t have to give the diamond back, since it was given freely to the British in the mid-19th century by the family of Punjab’s Maharaja Ranjit Singh, and had been “neither stolen nor forcibly taken by British rulers”. The Guardian adds that, "The statement was surprising after decades of demanding the diamond be returned. For many Indians, the loss of the Koh-i-Noor is symbolic of India’s subjugation under British colonial rule, and its return is viewed as partial compensation for centuries of economic exploitation."

But on Tuesday night, the culture ministry issued a statement saying it had yet to make its position known, and that India’s government would make all possible efforts to bring back the diamond. The court was hearing a petition filed by a rights group asking it to order the government to seek the return of the diamond. The two-judge bench said on Monday that it did not want to issue a ruling that might jeopardise a future attempt to bring back the diamond or other treasures that once belonged to India. It told the government to take six weeks to reconsider its position before the court decides whether to dismiss the petition. India, along with Pakistan and Afghanistan, have long squabbled over who has the rightful claim to the diamond.