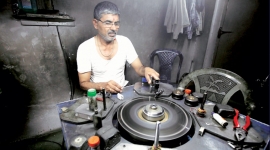 GEMKonnect takes a look at the intial fallout from the 42-day jewelers strike that provisionally ended last week. One short-term consequence is that, "Jewelers in the northern Indian state of Uttar Pradesh, who reopened their retail outlets after the 42-day jewelers strike was called off, are reporting that they are unable to meet customer demands as there is currently an acute shortage of artisans to fabricate jewelry. The jewelry artisans, many of them daily wage earners, have reportedly returned to their villages as they were unable to stay in cities without any income. The jewelers, meanwhile, are experiencing a surge in demand as customers flock to retail outlets to order bridal jewelry." This is not the first time this situation has occurred, as the 2008 economic downturn caused many layoffs of cutting and polishing personnel, who where subsequently no longer available once production picked up again, such that producers found it difficult to meet demand.

In the long-term, GEMKonnect is hearing that major changes are likely on the way to India's jewelry manufacture and retail sectors - namely in the form of consolidation. "The smaller operators - who numerically make up the bulk of the Indian industry - are increasingly likely to merge with larger, more organised players or sell out and exit the sector completely. Under the excise duty regime, all purchases of gold will have to be meticulously recorded and tracked and the compliance cost for manufacturing jewelry will also rise. This will erode the already thin margins many of the small players operate on and thus render them commercially unviable." Greater demand for compliance and transparency in the highly traditional (read, disorganized) industry will help reduce illicit practices, but will also place too high a burden on the small operators.