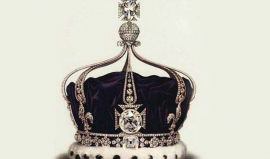 The femous Koh-i-Noor diamond that is part of Queen Elizabeth's crown was given to Britain and not stolen, India's government told the Supreme Court on Monday, which is hearing a suit seeking its return, writes India's Khaleej Times. The 105-carat Koh-i-Noor gem, which came into British hands during the colonial era, is the subject of a historic ownership dispute and has been claimed by at least four countries including India. But India's Solicitor General Ranjit Kumar said the 19th-century Sikh king Ranjit Singh had given the stone to the British. "It was given voluntarily by Ranjit Singh to the British as compensation for help in the Sikh Wars. The Koh-i-Noor is not a stolen object," he told the Supreme Court. Singh had taken it from an Afghan king who had sought sanctuary in India. The diamond had been an heirloom of the Afghan monarchy and before then was in Persian royal hands, but its true origins remain a mystery.

The Indian government says that because Maharaja Ranjit Singh of Punjab handed it over to the East India Company, there is no case to seek its return. However, the Foreign Ministry, which is also party to the case, has yet to outline its position. The judges have asked the Centre for a comprehensive response within six weeks. Its name translates as "Mountain of Light" and it has only been worn by female royals since it is said to bring bad luck to any man who wears it.