Polished Prices Could Be Hampered By Strong Rough Sales 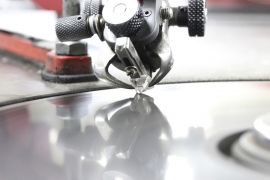 In the light of demand for polished diamonds which is far from spectacular and rising inventory levels, rough diamond trading was "surprisingly upbeat" in April, writes Avi Krawitz in Rapaport, asking whether the industry is again headed for an oversupply of polished goods in the market which will push prices down. De Beers posted its largest sales cycle so far this year at last week’s sight – and that despite raising prices by an average of 2%. Meanwhile, ALROSA sold most of its offering after slightly reducing prices. All in all, these two firms injected around $1 billion worth of rough entered the market in April alone between, and the duo supplied about $2.4 billion worth of rough in the first quarter.

The article is skeptical about a report by analysts at VTB Capital who expect a "strong pick-up in rough sales as cutters and manufacturers are increasingly pressured to reverse unprecedented destocking in 2015.” Krawitz writes that "rough sales in the first quarter should be sufficient to refill the diamond pipeline. Given the experience of last year, one would expect diamond manufacturers and dealers to exercise caution in producing too much polished inventory in 2016. While polished prices have firmed since November on lower stock levels, a slowdown in rough demand is now projected in the coming months if not for the remainder of the year, if the recent polished uptrend is to be sustained."

That is all the more the case because polished demand is highly selective, being steady for dossiers and 1-carat diamonds and weaker for sizes above 3 carats. "That was reflected in the De Beers supply as the company raised prices mainly for goods where polished demand is firm, such as 4-to-8 grainers that yield pointer sizes and 1-carat polished. Prices of rough diamonds that yield less desirable polished were left unchanged." De Beers supply may be more attractive than other sources since the company cut prices in January by about 7%, said one sightholder. That may be why they were happy to buy earlier this month despite the small De Beers price increases.

"Manufacturers ought to assess how they can sustain the positive experience of the first quarter through the slower season and beyond. It would certainly be a shame if the longer term momentum were broken by a build-up of excess inventory yet again. The April rough selling cycle suggested manufacturers might be doing just that at a time when they are, in fact, no longer under pressure to restock the pipeline. There is a sense that a normalized seasonality has returned to the diamond industry after the cycle was broken last year. But as rough demand remained strong in April, it appears that supply will put additional pressure on the polished market during the slower season," the report concludes.