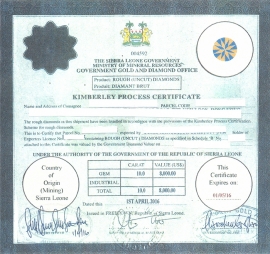 The Antwerp World Diamond Centre has forwarded an alert from Kimberley Process authorities about a fake KP certificate issued from Sierra Leone. The warning reads:

Be aware for fake certificates from Sierra Leone: Hong Kong received a shipment from Sierra Leone, which was declared to the Hong Kong Customs and Excise Department. Upon inspection they noticed that the KP Certificate accompanying the shipment was fake. Sierra Leone’s KP Authority confirmed this. The case has been referred to Hong Kong Customs and Excise for investigation. The document has also been uploaded on the restricted side of the KP website. The KP has therefore called on all its members to be vigilant.

A photograph of the fake certificate is in annex.