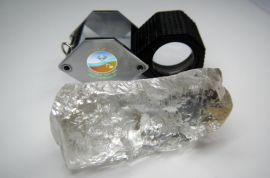 Record diamond production, including the largest diamond ever found in Angola, has generated the Lulo diamond partners gross revenue of $23M (A$32.5M) in Q1 2016, "underlining the strong global demand for large top-tier gems." Lucapa Diamond Co says the result was on diamond sales of 1,931cts at an exceptional average selling price of US$11,983ct (A$16,831ct), which included the $16M (A$22.5M) sale of the 404-carat Lulo gem - the largest recoded diamond ever recovered in Angola. Lucapa and its partners produced more than 3,000 carats in the quarter at Lulo, a 131% increase on Q1 2015 and 44% higher than Q4 2015. In total, Lulo to date has generated US$38.1M in gross revenues from the sale of alluvial diamonds recovered from the mining and exploration phases at an exceptional overall price per carat of US$3,147.

Lucapa also announced that trial mining at the E46 alluvial terraces at its Lulo Diamond Project in Angola has recovered more large specials and fancy-colored diamonds. The latest special diamond recoveries include a 59-carat Type I diamond and a 33-carat Type II-a D-color gem. Lucapa also recovered a number of pink diamonds from E46 including an intense fancy 0.2-carat pink. These results, in addition to a 4-carat pink diamond recovered in initial bulk sampling at the site, suggest that the area should include fancy-colored diamonds, as well as large, high-quality gems.