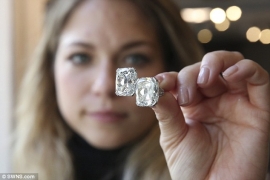 The ring, created by jeweler Hancocks in upscale Mayfair in London, is set with two 20-carat diamonds and coils around the finger with the ends of the band passing each other on top. The ring, which Hancocks has given a specially-designated security guard, has a price tag of £1.6 million (around $2.1 million).

It was designed by Amy Burton as part of her Unum range. She says the ring is the only one of its kind and size on sale worldwide. Stephen Burton, managing director of Hancocks, told The Daily Mail: "The diamonds are extremely rare given they are a perfect match, having been cut from the same piece of rough diamond, and are truly exceptional. In my 40-plus years of working in the jewelry business, I have never seen a pair that are as large and well matched as these, having originated from the same rough diamond source which is incredibly rare.