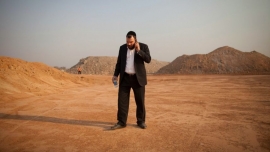 Reports from multiple sources are starting to detail the murky structures hiding the tremendous wealth accumulated by certain players in the diamond and gold trade that emerged through last week's release of the Panama Papers. Comprised of more than 11 million documents from Panamanian law firm Mossack Fonseca and likely the biggest leak of inside information in history, the unprecedented investigation reveals the offshore links of some of the world's most prominent figures, among which are - to this point - a few diamond and gold trading organizations. The diamond traders named thus far amount to a 'who's who' of the usual suspects, in particular Israeli diamond and mining magnate Dan Gertler - who has been accused of "essentially looting Congo at the expense of its people" - and the notorious Beny Steinmetz of the Steinmetz Group, both of whom are or have been under investigation for fraud and allegedly corrupt mining deals in the DRC and Guinea respectively. Haaretz reports that "Gertler, who made his fortune in diamonds and mining, is mentioned more than 200 times in the Panama Papers."

This article by Khadija Sharife details that "dodgy dealings within the Steinmetz Group seems to indicate undervaluing of diamonds, which is costing Sierra Leone tax payments", focusing in particular on Koidu Holdings, the Sierra Leone diamond miner owned by BSG Resources - Beny Steinmetz’s company. Sharife told JCK she is working on more diamond-related pieces, including one involving the industry in Botswana. “Diamonds are going to come up again and again,” she says. “I think it’s due to the nature of diamonds, where pricing is very subjective, and companies can underestimate their profits by undervaluing their exports. We have to make sure that, as important as diamonds are for the economies of Africa, tax havens are not used,” she continues. “Governments in the major diamond countries need to publish their resource contracts, they need to publish diamond valuation formulas, and ensure that companies do not use tax havens. These are public resources. These should not be things that are private.” In addition to Gertler and Steinmetz, Rosy Blue was identified in an Indian newspaper report, which the company denies.

Naturally, diamonds by no means corner the market when it comes to objectionable behavior of commodities companies and their tax havens. ANCIR also documents how, "new strategies of deniability, especially in the gold industry, have created opportunities for banks and refineries to wash clean the histories of conflict minerals." It states that, "Leaked data from Mossack Fonseca ... show that secrecy has become the rule for corporate trade and that where secrecy is allowed to govern, the process of differentiating the legal from the illicit becomes impossible. This is especially true of tax havens specialising in commodities - such as Dubai and Switzerland – where gold is without nationality or origin." The article focuses on Rawbank and the Rawji family, a leading financial institution in the DRC. "Leaked data shows that the Rawji family, the shareholders of the family-owned Rawbank, make extensive use of tax havens and shell companies. The purposes of these companies remain unclear."

A source in the audit committee at Rawbank spoke anonymously about the role of gold in Katanga, a resource-rich province in southern DRC: “Almost the whole economy is based on these metals, much more than on cash currencies. We are accepting payments in gold and diamonds from all our clients." Leaked data from Mossack Fonseca show details of the Rawji family offices based in Dubai and extending to multiple tax havens. ANCIR formally put a series of questions to Rawbank about "procedures [that] are particularly important in light of the UN report’s conclusion that gold from the DRC is essentially untraceable. After initially requesting information about why certain questions were being asked, Rawbank’s communication officer ceased responding." This lack of cooperation was the same tactic used by the Dubai Multi-Commodity Marketing Center (DMCC).

"Dubai’s rise as a gold buyer and onward seller is particularly worrying as it operates as a secrecy jurisdiction ... Currently, Dubai’s gold industry is worth more than $75 billion ... A jurisdiction like Dubai can gain a financial competitive edge in the gold trade by writing laws that give it the advantage over other jurisdictions where significant economic activity takes place." ANCIR asked the DMCC a series of questions about cash-for-gold transactions, transparency reviews and procedures: "The DMCC initially confirmed responses would be forthcoming; later, they enquired whether the article would be positive or negative. When we replied it would reflect fact, they declined to comment." The relevant question, whether with regard to Dubai or Switzerland, is that, "infrastructure may be designed for purely innocent purposes. But why use - or hide - behind a raft of tax havens and hidden beneficial owner in places where gold is neither produced nor where the real corporate seats are located?"

In short, ANCIR concludes that, "The system provides a gold standard that perfectly allows for for banks and refineries using Dubai and Switzerland to remove origin. Gold is faceless and placeless. “Good” gold is blended with “bad” gold. And regulatory vacuums – involving or enforced by quasi-private bodies like the LBMA and DMCC - help to ensure that all such trade is technically legal save for exceptional cases. But for the DRC, this hidden trade is lethal and one where the advocacy and regulatory markets have generally failed or feared to tread."