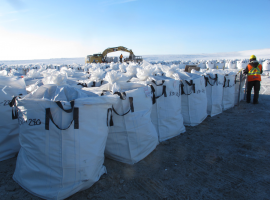 Peregrine Diamonds, a TSX-listed diamond exploration and development company with assets located in northern Canada and Botswana, has reported a 33% increase in inferred diamond resource - from 8.57 million to 11.39 million carats - at the CH-6 kimberlite pipe at its 100 percent owned Chidliak Diamond Project, Nunavut, Canada. Tonnage increased by 40 percent from 3.32 million to 4.64 million tons. The revised resource includes a newly identified zone which currently is estimated to contain 3.15 million carats in 0.76 million tons, for an estimated grade of 4.16 carats per ton. The company previously announced an Inferred Mineral Resource of 8.57 million carats in 3.32 million tons for the CH-6 kimberlite on January 26, 2015. On February 26, 2014, the Company announced an average price per carat of US$213 for 1,013.5 carats of CH-6 diamonds as valued by WWW International Diamond Consultants. The updated resource estimate for CH-6 was generated by Mineral Services Canada Inc. based on a recently completed comprehensive review of geological attributes, microdiamond and bulk sampling results for the CH-6 kimberlite pipe.

Tom Peregoodoff, Peregrine’s President and CEO said “When we planned the 2015 Resource Development Program for the CH-6 kimberlite, the challenge was to design a cost effective program that would make a material difference to the Chidliak project. With a simple two hole program and additional microdiamond sampling of existing core, we have exceeded the targeted resource expansions we initially envisaged. The 33 per cent uplift in the CH-6 diamond resource announced today should have a positive material impact on the outcome of the Preliminary Economic Assessment."