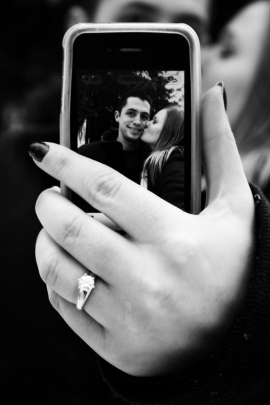 "This June at the JCK Las Vegas show," writes Rob Bates for JCK, "the Diamond Producers Association (DPA) will unveil an industry milestone: the first category-driving campaign for diamonds not sponsored by De Beers. The DPA’s campaign grew out of its research on millennials, including extensive surveys and focus groups conducted by its marketing firm Mother New York." Bates plans to take an in-depth look at their research between now and then, but provides a few spoilers about what they found out. Millennials' financial outlook is not as rosy as their parents' generation, but they seem to have shifted from material values to social and experiential values. Some specific details about their views on diamonds are, of course, of particular interest.

"Diamond jewelry can seem 'too formal' for this generation," writes Bates, and ostentation is equally out of vogue, such that "Conventional diamonds can seem a little blingy." As Mother New York senior strategist Thomas Henry states it, “When Kim Kardashian wears something large and flashy, it isn’t really appropriate. The idea that you would run the risk of ostentatiously showing off that type of wealth feels a little bit odd.” The good news is that they long for something 'real'. “If you think about the fact that they are living in an oversaturated world, they are desperately seeking these moments of meaning, which are few and far between, what they love about diamonds, and what we heard over and over again, is the authenticity. [Diamonds are] a product that they still believe carries authenticity, they are from the earth, they are very rare. That is an exciting opportunity. The way that millennials live their life now opens up a lot of space for diamonds,” he concluded. “It is just a very different space than diamonds used to occupy through most of the 20th century.”