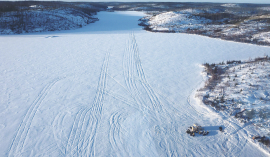 North Arrow Minerals announced the completion of its winter 2016 exploration drilling program at the Pikoo Diamond Project in central eastern Saskatchewan, and the main news is that it found new kimberlites in the North Pikoo area. "The most significant kimberlite discoveries of the program have been made in the North Pikoo area where kimberlite was encountered in seven of nine holes. Relationships between kimberlite intervals are complex with at least two, and perhaps up to four, discrete new kimberlites having been discovered. The most significant discovery is kimberlite PK346 which is interpreted as a near vertical NE trending body located approximately 25m north of kimberlite PK314, discovered in 2015, and south of a series of narrow kimberlite dykes discovered in 2013." North Arrow drilled five holes each at South and East Pikoo. A total of 2,124m of drilling was completed with kimberlite encountered in 14 of 19 drill holes at the three locations.

Exploration of the Pikoo Project is conducted under an 80% (North Arrow) / 20% (Stornoway Diamond Corporation) participating joint venture arrangement. The joint venture has approved a $1.69M budget (including contingencies) for the 2016 drilling program. Stornoway has elected not to contribute its share of the 2016 exploration budget. North Arrow has elected to solely fund the program and as a result its ownership interest will increase to approximately 85%.