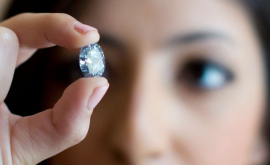 A 10.10 carat blue diamond, named "De Beers Millennium Jewel 4",  went under the hammer today at Sotheby's in Hong Kong, selling for $31.8 million. It had already clinched the title of largest Oval Fancy Vivid blue diamond to ever appear at auction, and has now broken the record for most expensive diamond sold in Asia. The auction house describes it as, "a superb oval internally flawless fancy vivid blue diamond weighing 10.10 carats, which is the largest oval fancy vivid blue diamond ever to appear at auction." The diamond, which is slightly larger than an almond in size, came from South Africa's Cullinan Mine and was one of 12 displayed at London's Millennium Dome to mark the year 2000, where it was famously the target of an attempted robbery that was foiled by the Metropolitain Police. "There are no more than a dozen or so blue diamonds of fancy vivid color and over 10 carats in the world, so they are very, very rare," said Sotheby's Deputy Chairman for Asia Quek Chin Yeow.

Nonetheless, just last November, Asian property tycoon Joseph Lau Luen-hung bought the 12.03-carat "Blue Moon of Josephine" for his daughter at Sotheby's auction in Geneva, paying a record $48 million. On 18 May, Christie's will sell the largest Vivid Blue diamond ever to appear at auction, a classical emerald cut stone weighing 14.62-carats, the Oppenheimer Blue, at the ‘Magnificent Jewels’ auctoin to be held at the Four Seasons Hotel des Bergues in Geneva.