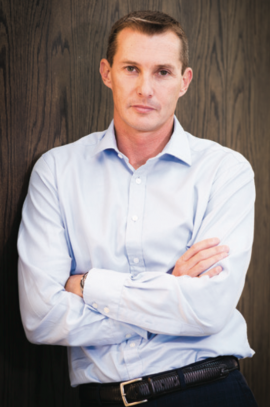 The CEO Magazine sat down with William Lamb, CEO of Lucara Diamond Corp. - finder of the 1,111-carat Lesedi La Rona diamond at the Karowe Mine in Botswana - to talk about steering the development of the small miner with the big stones. Lucara’s acquisition of the Karowe Mine presented a major growth opportunity for the company. It was towards the end of 2009 when Lucara was able to obtain a 72 per cent stake in the Botswana asset as part of its AK6 project, and then set about constructing the mine. “It was in 2012, which was not the easiest time because we didn’t have a lot of information about the north lobe where the initial mining was focused. But since then, as we’ve mined into the other two loads within the resource, we’ve managed to see exponential growth, not just in our understanding of the ore and how it actually behaves, but also in the recovered revenue."

“As an example," Lamb continues, "when we bought the project, the whole premise of actually spending the money was based on US$120 million of revenue per year. If you look at the last three years, we’ve done $180 million, $265 million, and [$223.8 million]. So we are generating much higher revenues from the same plant. It has been a very successful story for Lucara and its shareholders.” Having said this, William states that Lucara is “a very small drop in the diamond pond,” producing 350-400,000 carats per year compared to the global average of 125-128 million carats. “We’re sitting at about 0.38 per cent of worldwide production,” he says. Nevertheless, “Because of the size of the stones we recover we are in a position to materially affect the sales side for these stones in the marketplace ... supply and demand fundamentals for the large stone is becoming very important for us in terms of overall monitoring. That’s where we fit into it. We have a role to play, even though we’re a very small producer.”

Lamb's technical background in the diamond industry helps him to understand, "the technical aspects, allows you to manage people a lot more efficiently." It has also helped him define Lucara's core values: safety, communication, responsibility and strong relationships with suppliers and corporate alliances. And while Lucara has grown faster than he had reasonably imagined, it is not all clear sailing ahead. “The short-term future is not going to be an easy road,” he notes. “The main criteria that is affecting us is rough diamond inventory because many of the large producers are not selling due to the slowdown in the consumption of smaller fine goods. They keep building inventory in that area, but because polishers are not getting money back in again, from the sale of polished goods, the inventory build-up goes all the way through the pipeline. So the buyers are not getting money to buy rough and that’s because we’re not seeing the polished stones being sold off into the consumer market. It’s going to take probably more than 12 months to actually see that inventory flow through the pipeline. There’s still 12 to 18 months of tough times ahead yet.”

To get through this perceived challenging period, Lucara will be focusing on safety and cost control: "“Reduce the cost as much as possible, but also try and maintain a high production profile,” preserving value by recovering large stones without breaking them. The final focus will be on the actual sales process. “The challenge is, when people actually start to see that the market is in a tough position, then they are less inclined to travel to Botswana for a sale. So it’s making sure we’ve got the right people and the correct production profiles so that the sales parcels are set up very well ... Focusing on our sales side to get the best value for our stones is vital.”